Flume What You Need

Brontë Martin
Published:
Feb 20, 2013
Total plays:
129,345
Saved:
843 times
Sounds like: Chrome Sparks, Disclosure, Hermitude
Tags: Electronic, house, chillout
Why do we like this?
Flume is everything that electro music embodies: grungy, decelerated beats andsynths with synthetic chord progressions, all bundled into a uniform sound. Based out of Australia, this industry youngster proves to be reaching quite a mature musical state, carving a prominent sliver in today's music market.

After winning Future Classic's submission contest back in August of 2011, Flume (Harley Streten) has been fast tracked to the big leagues, having toured with The xx and collaborated with heavy hitters like Chet Faker and T-Shirt, much to his honest surprise and delight.Sleeplessis the EP that has made it all possible for this Aussie, and it was just released in the UK/Europe February 18, 2013 via Transgressive Records, and on February 19, 2013 inNorth America via Mom + Pop Music.

I had the honor of chatting with Harley, and caught up with him about his worthwhile journey thus far, having been catapulted into stunning musical accreditation in a shockingly short span of time.

You have quite an interesting relationship with a cereal box. Tell us about that.

Ah, the old cereal box story. Well, I was shopping with my Dad when I was 11 and there was this Nutrigrain box that contained this simple loop-based music software program inside. I thought it sounded kind of cool so we got it, installed it and I started mucking around. I realized the drums, the synths and the bass were all on different lines, they were all separate layers. That notion fascinated me; the whole concept of how music was layered like that to make one big sound. Ever since then I've adopted it as my hobby and I remember showing all the kids my beats on the bus ride to school.

Who were you listening to when you first began producing seriously?

When I signed up with Future Classic in late summer of 2011, it got me thinking I could really make something of this. My goal was always to make a comfortable living of doing what I love, and this signing made me realize this goal was possible. Around that time I was listening to a lot of dance, house, techno, electro and trance music, as I had been all my life. In 2008/2009, that music kind of died for me and I began listening to Flying Lotus, Shlohmo, Four Tet, and Bonobo. After finding that stuff, the Flume sound emerged.

Your first release was the Sleepless EP back in 2011. How did this come to be?

I don't know, I really just mucked around. I started doing really slow four-four kick drums, so it was like dance music but just mellowed out. Like a simple "˜bommm-chh!' on the one and the three. I just vibed on that, and dragged influences from others like Washed Out and Toro y Moi. I didSleepless, and in the next two days I did two more tracks that ran in the same vein, and they all sounded fucking cool. And there I had it.

You've collaborated with many artists such as Chet Faker, T-Shirt and Moonlight Holiday. What has been the most interesting musical result in your opinion?

Well, I have to go off what has been most recent. I just spent a week with Chet Faker in a holiday house on the beach in Australia. We had an amazing time and wrote heaps and heaps of music. We came out of it with three tracks, all of which we are insanely pleased with. We plan to release it sometime this year.

The official worldwide release date ofSleeplessis here. How do you feel?

Australia has been a real nice guinea pig tester forSleepless, as it came out November 2011. It's done great over here, so I feel quite confident about it. I really am hoping it does well over in the US!

This is a selfish question: "Insane" is my absolute favorite. Tell us how it came to be.

This is one of the earlier tunes on the album, and it came to be because of my love for trance music. The chord progression is reminiscent of euphoric chords that often pop up in that kind of music, which I paired up with a French-sounding flare. I had it as an instrumental initially, and then I decided to get in contact with Moon Holiday (who also had done stuff with Future Classic in the past), and we linked up and came up with what it is today.

You surpassed Biebs on the ARIA Albums Chart making it to number 1. Wow?

It's awesome.Sleeplesscame out on the same day as One Direction, and we somehow beat them and ranked number one on the charts. We had no expectations of any of this. I'm just stoked that these younger girls are actually getting into the music, and instead of getting into Bieber, they're listening to my album.

You just announced a huge tour;I've bought my tickets for Montreal already. How do you feel about it? Nervous?

It's daunting to be honest. I've been on tour for the last like four months, so it seems endless at this point. I just got back from touring around Europe, Australia, and New Zealand, and now my other project What So Not is touring around Australia. And soon enough we're off to the US for five weeks with Flume, and then a bunch of festivals! It's going to be super fun though.

What's going to happen with Flume in the future? Any idea what might be in the works?

Flume is going to be all about the live show expansion. We're pouring heaps of money into this epic, crazy live show for you guys. We've got this huge infinity mirror with 6 LED screens in a hexagonal shape that showcases each unique projection for each song. You as an audience will be able to see when the kick drum hits, and when the hi-hats hit. It's a good way to visualize the music. Beyond that, I'm thinking of taking it a step further and possibly getting a drummer in the mix, so it's more of a band experience rather than a club event.
- Google Brontë Martin
Streaming source: https://www.youtube.com/watch?v=-zx6odbKMCw
TOUR DATES
View all X tour dates for . 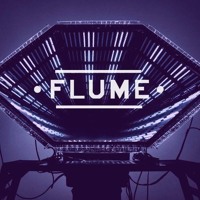