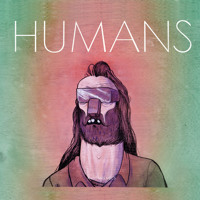 Bryan Mojica
Published:
Oct 06, 2010
Total plays:
11,068
Saved:
28 times
Sounds like: Hot Chip, Sebastien Tellier, TV on the Radio
Tags: indie rock, electronic-rock, folktronica
Why do we like this?
Canada's secret is almost out. Referred to as "Vancouver's number one party band of the moment," Humans are a week from releasing their first official EP. Don't get the wrong idea from the tagline though: the seven-song bundle proves that this is assuredly more than just "party music." Mixing the duo's backgrounds in folk and electronic, the music moves fluidly between genres and moods. The result is a fresh, eclectic soundtrack for those who have a lust for life.

Humans are Robbie Slade and Peter Ricq, a couple of puppets (see interview and video below) from British Columbia, Canada. Okay maybe they're not puppets, but they do have a sense of humor and their talents extend far beyond the realm of music (filmmaking, art, making custom bikes, entrepreneurship). Both are multi-instrumentalists, while folk-experienced Robbie sings lead vocals and electronic-based Peter heads the synth and drum machine. These guys know how to have a good time and their songs implore listeners to do the same.

The eponymous track from the EP, "Avec Mes Mecs," is exemplary of what Humans do best: matching infectious dance beats to a poignant cry. They create an emotional dichotomy between instrumentation and voice.  The upbeat, dance-happy rhythm plays background to Robbie's reverb-laden drone, evoking  apathy and angst.  An emotional rise from this lethargy comes two-thirds of the way into the song as Robbie exalts, "Who knew that all we had to do was party?" complimented by a triumphant climax of pulsating, heavy synth. What started as a tranquil toe-tapper is now a frenzied exclamation that commands dance.

Such highlights are prominent throughout the EP, and yet remarkable that Humans manage to create a distinct sound with each track. It is a treat to witness Peter explore a spectrum of synth sound ranging from clean keys to an 8-bit lo-fi crunch to a very dense, gritty bass. "Mon Ton Ton 2" is reminiscent of Hot Chip with its bright, clean backing and clicking percussion while the loud, buzzsaw-like sound employed in "Avec Mes Mecs" resembles Soulwax. Robbie's vocal hooks provide the necessary glue throughout, as he is consistently riveting whether in a dejected murmur or a soulful yell.

Avec Mes Mecs will be digitally distributed worldwide on October 12via Blood & Water/IODA.  Special thanks to Humans for taking the time to answer some questions. Enjoy and be sure to check out their highly entertaining video for "Bike Home" at the end of the article.

How did you guys meet?

Peter: We met at an Art show at Ayden Gallery where I was showing some work. I met a guy, Robbie, who looked a lot like a character I've been painting for a couple of years.  Natural next step was to become friends and start a band called Humans.

Your videos for "Bike Home" and "Doin Things" depict a duo of puppet cops  partying and watching mud wrestling.  What's the party scene like in Vancouver?

Robbie: Well it's pretty rainy here, but if there's no rain you can tell where the good parties are by the billion bikes locked up all together like a post-apocalyptic jungle gym.  Over all, there's a great deal of pride for our city.  Everything is close together so you can bike, but it still has that big city feel. The stuff that gets people really excited are the free outdoor parties that local DJs throw for fun, or the burgeoning local festivals that have been popping up over the last couple years.

Peter: The "Bike Home" video was recorded at an actual party in Vancouver so I guess that can give a pretty good idea.

Do you plan on sticking with the puppet alter-egos?

Peter: Puppet alter-egos? We are puppets.

What's the craziest thing that has happened to you at a party or show?

Robbie: Once, when I was in the drunk tank, I started singing and drumming on the walls and all these random guys from all over the lower mainland started joining in.  We got louder and louder and the song climaxed until we were quiet.. then we heard the next cell over singing and drumming.  I was a king that day.  I still have a buddy I met in there and we hang out.  The cops were laughing saying they've never seen that before.

What is your drink of choice?

Robbie: We have a few methods.  Sometimes I will come to Pete with a mediocre folk song that I've written and deeply hate. We'll sample my voice and write corresponding bass lines, and then we'll totally transform it until it is something unrecognizable except for maybe a hook.

Peter: It's changed throughout the year.  Now it's a lot of fighting and arguments about kicks, snares, and bass.

You guys definitely have a lot more on your plate than just producing music. Can you tell us a little about your other engagements and where they rank as a priority (bikes, art, etc.)?

Robbie: Pete and I both have real jobs that we really enjoy.  The bikes thing for me is a whole other can of worms.  So fun haha.  My partner was a total nutcase, he's who you should be interviewing.

Music is theoretically my top priority these days but it gets pretty swallowed up in everything because it's hard to strip away and focus.

Peter: I'm a full time art director at an animation company in Vancouver and I create TV shows for kids but want to do more mature things in the future. I wrote, directed and produced the first video "Bike Home" for Humans and am working on a new Horror video that'll be ready in mid October. This time, no puppets.

I do Illustrations and paintings as well.  I'm putting together a fine art show in November to raise money for prostate cancer research.

What artists have influenced your sound?

Peter: Sebastian, Daft Punk, Animal Collective, Metronomy, Does It Offend You Yeah?, Sleigh Bells, TV on the Radio, The Kills, Sebastien Tellier and others I can't remember.

Who are you currently listening to?

Robbie: Yachts, The Very Best, Rove Dogs, LCD Soundsystem, and always Daft Punk.  I can't stop pouring over all the Radio Zero mixes.  They're so, so fucking good man.

What are you looking forward to least/most in your upcoming tour?

Robbie: I think most of it will be pretty fun.  We've been around each other enough to bicker but we are very close so it's always really fun.

Peter: This will be my first tour, so partying with my friends and playing in new venues is exiting.  Going to Montreal, where I'm from, should be fun.  None of my friends nor family there have seen us perform yet.