Dwayne
Published:
Jan 25, 2011
Total plays:
19,900
Saved:
107 times
Sounds like: Good Shoes, Franz Ferdinand, Bombay Bicycle Club
Tags: indie rock, indie pop, bombay bicycle club
Why do we like this?
I've been lucky enough to get my hands on a pre-release copy of Little Comets debut In Search of Elusive Little Comets. The band's talent and sound makes it feel like this should be their second or third album, rather than their first. The mix of slower piano and almost balladesque anthems, combined with more upbeat, traditional indie guitar rock, is better than any debut has the right to be. On In Search of Elusive Little Comets, clever wordplay fits comfortably over an array of catchy tunes and good strong beats.

Comparisons with the likes of Good Shoes, Franz Ferdinand, and Bombay Bicycle Club are obvious and valid. At times, Little Comets even sounds like Foals or Vampire Weekend; at others, they stretch to the territory occupied by the likes of Glasvegas, which isn't surprising considering MGMT & Glasvegas producer Rich Costey is behind Little Comets, too. Fortunately the Foals et al moments are more present than the Glasvegas, because it's the fast, frenetic indie rock of this type that Little Comets specializes in.

The album drops on January 31, and is accompanied by a nationwide tour. "Joanna" is one of their best known tracks. Give it a play and you'll get a feel for what Little Comets is all about. Unfortunately I can't stream the whole album on Indie Shuffle, but if you do buy it, or stream it on Facebook, be sure to look out for "Dancing Song" and "Adultery."

I was lucky enough to chat with lead singer Robert Coles:

This album took a long time to make. For those who aren't familiar with your back story, can you explain what happened?

We're four very different people from the same small city in the North East of England, and for as long as we can remember we've tried to do everything ourselves. Mickey (our guitarist) produces the music, I do the artwork, and Mark and Matt chuck in the odd slew of ideas (from slightly bizarre videos to playing on trams and in lectures halls). When we signed to a major label, this obsession with minutiae totally clashed with their approach. After 12 months of arguments and head shaking we happily parted company. Luckily, we'd managed to retain musical ownership over the album by persuading them to let Michael produce, so at least we walked away with something that we felt was ours. After that we looked for a label who would be happy to let us be creative and just work with the results and we were fortunate enough to find the lads at Dirty Hit.

Tell us a little bit about the album.

The album was inspired by a set of stories, places, accidents and incidents, hints and allegations from around our lives in Newcastle. We recorded it in lots of different places - a school, an old television studio, any interesting outside space we could find. I suppose we took a lot from albums like Bookends and Graceland, and the idea that any object has an inherent musicality just waiting to be discovered. We would describe a sound that we wanted ("the snare should sound like a car door slamming" or "this section needs an ending that sucks out like a vacuum cleaner"), and then try to make the simile or metaphor a reality by using these actual objects.

Lyrically the album is influenced by authors such as Roald Dahl (boundless imagination), Milan Kundera (tying my brain up in knots) and Jonathan Safran Foer (use of objectification and language), but all for entirely different reasons. Hopefully, there is also an interesting juxtaposition between quite dark lyrics and more jaunty, major melodies.

What is your favorite track from the album?

Hmmm. Strangely, I think the track "Isles" is my favourite. Lyrically it isn't our best piece, as it is one of my first attempts at writing a song which tries to capture an entire set of social issues in two verses and chorus - I think it takes a lot of practice and maturity to do this, and I've still got a way to go. But from a musical point of view, it weaves nicely and Mickey has made the drums sound amazing. He also gets quite excited about the backwards reverb in the chorus... apparently.

You managed to generate a strong fanbase as an unsigned band. Apart from obviously having good music, how did you do this?

After starting the band, we wanted to play in places that had a captive audience. We thought that if we could pin someone down and make them listen, then we'd hopefully be able to hold their attention. So we started gigging on trains and trams, in university lecture theatres and cafeterias. Other than this we'd contact people on Facebook in other cities like Manchester or Liverpool and ask if we could play at a house party they were having. We learned a lot from performing in front rooms, in terms of how to connect to an audience. I think Mickey also thought that it was really important to give music away, so anyone who contacted us would (and still does) get a personal response and the offer of a couple of free songs to listen to. Along with getting a bit of support from radio DJs like Huw Stephens and Tom Robinson (who do so much for unsigned bands), all of these things definitely contributed to building a little fanbase!

In the course of making this record, you toured the UK fairly extensively. What was your favorite city to play in, and why?

Hahaha, we have different cities for different things: Newcastle for home cooking and a comfortable non-travelodge bed, Manchester for sweet potatoes and vintage clothing stores, Liverpool for chirpy people, Hull for the most rambunctious crowds we have ever encountered, and Edinburgh for the coffee!

You seem quite politicized (e.g. Darling Alistair). What political issue do you feel most passionately about now?

Wow, that is a tough question.... there is this guy in Britain called Michael Gove (the education secretary) and he typifies everything I dislike about the conservative government. They seem to be using the recession as a way of implementing policies that are heavy on rhetoric but don't actual solve the problem that they have been designed to alleviate. The latest idea is that students of a certain age are encouraged to stay on in higher education by being given an allowance of £30 a week. In practical terms this money is so important to kids from more impoverished backgrounds as they can use it for transport costs, books, or to stave off the need to get a low-paid job which would impinge on their ability to study effectively. The government are removing this allowance, which seems like a direct tax on the poor.

Finally, any shameless plugs you want to make?

Nope, I suppose just to say that our album comes out on January 31. It is called In Search of Elusive Little Comets and you can listen to it in full on our Facebook page www.facebook.com/littlecomets. Also if you are bored check this out.

This post originally comes from a piece I wrote over at my blog, Compromise Music.

You can find a longer version of this interview here.
- Google Dwayne
Streaming source: http://soundcloud.com/littlecomets/joanna
TOUR DATES
View all X tour dates for . 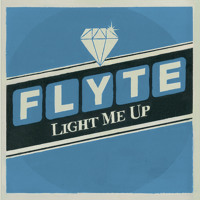 Flyte - Light Me Up