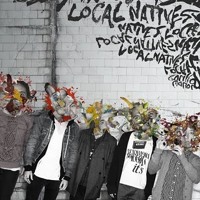 Only a year ago, Local Natives were opening for Blind Pilot and selling thin-sleeved copies of their EP at the merch booth (see our post from last summer here).  Today, the Southern California group has played seemingly every prestigious summer music festival:  Coachella, South by Southwest, Pitchfork, Bonaroo, Glastonbury, Oxegen, and T In The Park are just a handful of significant appearances the quintet has made, and deservedly so.  Their LP Gorilla Manor is easily one of the best albums of the year, if not the best

.I was fortunate enough to meet with singer and multi-instrumentalist (keyboard, guitar, percussion) Kelcey Ayer before the group played the most captivating set of the day at FYF Fest in Los Angeles.  We chatted about Mexican food, being "blog geeks," getting to meet Thom Yorke, and receiving their biggest paycheck to date - only to play to a crowd of five people.  Also, enjoy the Local Natives photo gallery from FYF Festas well as two remixes of "Who Knows Who Cares" at the end of the article  (both songs were recommended by Kelcey).  Superhumanoids match the beautiful vocal harmonies with smeared synths while BretonLabs' rendition features an infectious dub break.

So you guys are at the tail-end of your summer festival tour, how has it gone?

It's been amazing, I mean super cool.  The shows went really well.  Only a couple screw ups here and there on our part.  But yeah, for the most part it was great.  It was cool to go to Glastonbury and Reading and Leeds "“ the really huge festivals because we'd always heard of them so it was cool to actually be a part of them.

About those screw ups, what were some of the bumps along the road?

I don't know why but T in the Park in Scotland was just a catastrophe.  I mean sometimes one or two guys would be like "I messed up."  It's really nitpicky and something that probably only we would ever notice.  But that show we had like four huge mistakes at the same time and it was just a really crazy scene because it was also raining out.  We still had a good crowd there and we love Scotland and have had great shows in Glasgow, so it was unfortunate.  Although again, it's very nitpicky and I'm not sure if anyone else thought it was bad.

But then we just played in the Open Air Festival in Switzerland two weeks ago and were paid the most money of any gig ever, so we're like "Holy shit!  This is crazy!"  We show up and we played to like five people [laughs].  We arrive and there's nobody there and they're like, "Hey, you're supposed to go on."  We're like, "Huh?! There's nobody here. Nobody's at the festival yet, we can't play can we??" So it was really funny.  We were laughing the whole time because it seemed like such a waste of money.

Were the five people into it at least?

Well, there was nobody but our tour manager at the start and then it grew to, during our last song, like 30 people and then we ended and all these people are like 'What! What the fuck please keep playing!' And we're like, "Ah we're so sorry, set's over.  We have to go."  So there were very mixed emotions that day. [Laughs]

Of all the cities you visited, which is your favorite?

We really like Dublin.  We've always had a really great time in Dublin and for some reason Dublin always ends the tour.  We were out in June for a month and the last festival we did was Oxygen.  The Irish people are so stoked on the band "“ we always have such a great time there.

You guys had a really quick rise in the last year "“ at what point did you realize you were generating some really good buzz?

I think it was when the album hadn't been released in the States yet.  There was a lot of buzz in the UK last year as a result of South by Southwest, so that was awesome... but the UK gets really hot and then dissipates really quickly.  So by the time January or February came around it was dying off and we were about to release the album in the States, hoping it would go well.  We released Gorilla Manor and it was the number one record on the Alternative section of iTunes...  It was us and then Vampire Weekend, so we're like "Shit!"

That same week we put up our dates for our upcoming (first headlining) tour in the US.  We played Bowery Ballroom in New York and it sold out in like five days so we put up another and that sold out.  So I think that month, February, was really just crazy.  Pitchfork really dug it and we're all music blog geeks so we were all going nuts.

What are some of the blogs you check?

Ryan goes on Stereogum a ton.  We love Daytrotter - we think it's an amazing place to hear new stuff.  Sound on the Sound in Seattle is awesome too. It's a lot of blogs we've made personal relationships with.  We All Want Someone To Shout For is another.  It's been cool to make friends with these people when we were like nobody and then we watch each other grow.  It feels really honest and organic.

Outside of music, what do you enjoy doing when you have free time?

I'm really excited to go to Disneyland next weekend.  I love Disneyland, that's really lame and Southern California of me but I don't care. [Laughs]  I love to cook.  I'm excited to be home with my girlfriend in Silver Lake and I'll be able to just relax. I'm a huge movie buff so"¦

Any good ones lately?

I just got into a bunch of Paul Thomas Anderson movies. He did Boogie Nights, There Will Be Blood, and Punch Drunk Love. I really like how he sees things.  For shits, last night me and my girlfriend saw The Other Guys. It was okay "“ didn't have high hopes "“ but I love stupid humor.

Has your girlfriend traveled for any of the out-of-state or international shows?

She hasn't come out for any international shows yet but when we're in the States she tries to come out a ton.  It's just hard because when she comes out she can't stay for that long.  It's so quick when we're abroad that it's hard to get her there because we're bouncing around so much.  It's definitely difficult, but shes a trooper. She's also a huge music fan too so it's been awesome for us "“ we got together when Local Natives started.

When was the last time you guys were able to spend some time home, here in Southern California?

For a minute? We had a week in July, but I went on vacation with my girlfriend.  I think this is the first time I've really been able to spend a week in LA/Southern California since after South by Southwest.

Knowing all the great food that's here, is there anything you've been craving while you've been away?

Of all the acts that performed alongside Local Natives at the festivals, which were you really excited to see?

We had somewhat of a transcendent, magical experience at Glastonbury. There was a special guest on after the Big Pink who played after us and nobody knew who it was.  Then that day we saw Jonny Greenwood walking around.  It ended up being Thom Yorke and Jonny Greenwood just fucking around on piano and guitars and I got to be side stage and watch them perform.  It was incredible, it was unbelievable. We're all such huge Radiohead fans and I got to meet Thom Yorke and Nigel Godrich the next morning.  They're really nice guys.  It was incredible.

You wrap up touring in December.  What are the plans upon returning?

I think December's going to be a good recoup month and then in January we'll start tinkering with some stuff.  In February we're going to Australia and Japan, so hopefully when we get back we can hit the ground running and really go after this new record.  Whatever it will sound like, we don't know. We're really excited to have no boundaries.

We're definitely excited to hear it, that's for sure.