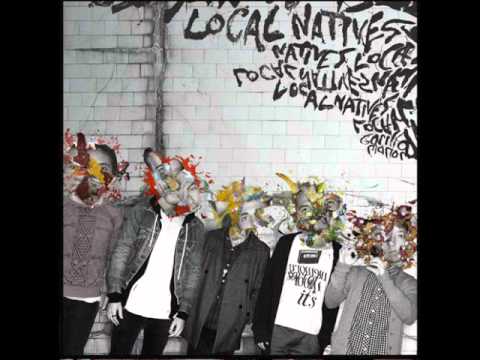 Sometimes, the best music finds come to you when you least expect it. I had gotten free tickets to see Blind Pilot, and these guys happened to be opening. They also happened to be amazing. "Local Natives" have only been around for a year, but they play like they've been around for ages. Along with their five original members, they were also touring with an extra fiddle player (don't know her name) who helped fill out their rich, orchestral songs

, and man could they belt those vocal harmonies. Had they been a little more established, I'm sure the whole room would have been singing along. Their energy made me completely forget about my horrible jet-lag I showed up with.

I made my way to the merch booth as soon as their set and bought myself the only EP they had available, which came in a thin plastic sleeve. Even on what looked like a very low-budget release, the recording still did an excellent job translating the live experience. Take the visceral emotion of "The Arcade Fire"mixed with the warmth of "Fleet Foxes'" melodies -- it's both rousing and soothing.

Apparently one of their songs ("Airplanes") has been featured on the show Chuck, but they have yet to be signed by anyone. Seems like quite a jump, but if they keep this up, they deserve it. I can't wait to see what the full-length will sound like.