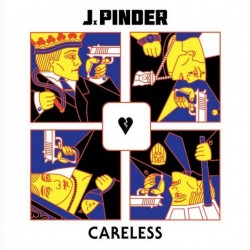 sweeney kovar
Published:
May 20, 2012
Total plays:
2,180
Saved:
6 times
Sounds like: Black Milk, Royce da 5'9", J. Cole
Tags: hip-hop, rap, black milk
Why do we like this?
I showcase alot of hip hop that's a bit deviated from the norm, so sometimes it's not a bad idea to go back to some normal, everyday rap music. J. Pinder is from Seattle, not usually a place that is known for their hip-hop exports. He plans to change that with his upcoming Careless EP.

I first heard of J. Pinder by seeing him live, opening up for Black Milk on the former's Claps and Slaps tour early this year. While the material itself didn't move me immediately, his showmanship was commendable. At the young age of 23, the MC has a command of the stage and a natural charisma that goes a long way. Clearly eager to prove himself, it will be very interesting to see what becomes of him when he gets a bit stronger and clear grip on his own sound.

According to AboveGround magazine:

"Pinder's style is reminscent of Lupe Fiasco, and artist that paved the way for artistic MCs to make a statement while enjoying huge commercial success. His smooth delivery, serious themes, and an ear for engaging beats make him a natural heir to the throne. With a little time I think this guy could reach Lupe-like heights in hip hop. Get your hands on Careless so you can tell people how you knew about him before everyone else did."

While I don't know about all that, dude's not bad.
- Google sweeney kovar
Streaming source: http://soundcloud.com/jpindermusic/never-no-radio-edit
TOUR DATES
View all X tour dates for .

FowL - Live From The D