In anticipation of her fourth studio album, Gemini II,  Portland folk singer Johanna Warren has released a music video of her song "inreverse." It's an acoustic trance that weaves together sentiments of codependency, heartbreak, and self-definition.

Featuring Warren's spacious vocals and minimalist guitar plucking, the video depicts two modern dancers dressed in white and entangled in scarves. They flow in and out of each others arms, mimicking the indecisive gyrations of a floundering romance.

But what would otherwise be a melancholic folk tune that's overstayed its welcome, turns into an ambient ballad. "Some stories make more sense read in reverse / but which one came first / I was your blessing and I was your curse."

We see more experimentation with angles, lighting, and the peculiar beauty of two interacting bodies. Masquerading as indie folk, we fall into a poignant serenity. 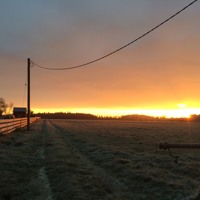