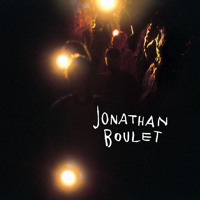 Aussie Aussie Aussie, Oy Oy Oy! Another talented and remarkably young Australian artist, Jonathan Boulet is tearing up sound waves the world over -- he's getting good airtime on my side, at least. At barely 21 years of age, Boulet writes folk-pop that'll take you straight to the world of endless campfires and tribal jam sessions. What's remarkable is that he wrote, recorded, produced and played almost every instrument from within his garage

! The end product of this prodigy is mildly mindblowing. I'd love to be able to post the whole album, but that'd just be against policy. So that said, I highly recommend you think about getting this album on iTunes -- just click the image above.

The phrase "jack of all, master of all" isn't exactly one that gets bandied about, but is one that may well apply to the most recently inked player in the Modular clubhouse, Jonathan Boulet. A precociously inspired 21-year-old skate rat from Sydney's northwest, Boulet makes a brand of ceremoniously uplifting, deeply colourful pop that sounds like something for which you've been searching but never thought you'd find. - Modular