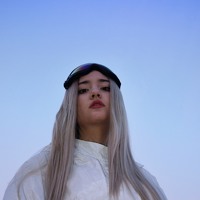 Lia Lia's name apparently stands for "Live Impact Area Legacy Interface Adapter," an assortment of words that meld human and electronic elements together in such a way that they roll off the tongue and immediately get stuck in your head, just like her awesome debut single "OLYMP."

I think what makes this track so addictive is the crazed calmness with which it runs through such high peaks and deep valleys of emotion. We've all at one point or another reached those extremes where all we want is a purging release via chemicals and pheromones, and from the song's video of some late night debauchery/snacking/smiling, it's clear that Lia Lia knows the feeling. Lucky for us we can press play and experience it again and again right along with her.

Quite the introduction for the Berlin-based 19-year-old - this is electro-pop done different. I'd stay tuned if I were you.