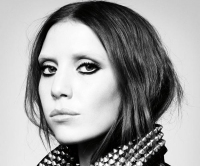 Lykke Li Get Some

The first, "Get Some," will be on her upcoming album, yet titled, and to be released early next year. Particularly striking is the song's similarity to Emiliana Torrini's "Jungle Drum" (it even includes the lyrics "shot gun").

Even more bizarre, the second track "Paris Blue" (claimed to be a B-side) closely matches songs on the aforementioned Emiliana Torrini album. Should we consider this a Sweden vs. Iceland smackdown? Are we about to get a new album of been-there, done-that-music from Lykke Li? Does that make it automatically bad? Not necessarily, but right now I'd pick Emiliana to win the quality match, and Lykke Li to win the pop/success match.