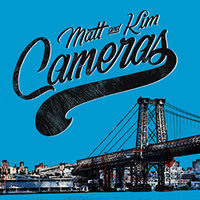 Kimberly Manning
Published:
Dec 28, 2010
Total plays:
8,171
Saved:
42 times
Sounds like: Passion Pit, Ra Ra Riot, Edward Sharpe, Sleigh Bells
Tags: indie rock, indie pop, electro-pop
Why do we like this?
Brooklyn duo Matt & Kim released their third studio effort in early November. The indie-pop rockers attempted to create more epic hipster theme songs like "Daylight," but fell a little short short with their album Sidewalks. However, they do make it clear that they are all about having a good time.

The poppy electronic backbone of Sidewalks gives songs like "Block after Block," "Cameras" and "Ice Melts" that extra dance infused goodness. With catchy lyrics and simplistic beats, this album is a true pick-me-up from start to finish.

Needless to say, the album artwork on Sidewalks is one to be mentioned. Using the urban flair the duo is known for, the artwork uses graffiti-style print and a gritty photograph without straying too far from their playful tone. Matt & Kim have a similar tendency in their sound throughout the album.

Matt Johnson and Kim Schifino use all necessary elements to produce a peppy yet spastic sound throughout, but fail to create depth as seen in their previous album, Grand. Songs like "Silver Tiles" are too poppy and simple. Sounding like a tune from the Britney era, "AM/FM Sound" is hard to get through, but it's just a small bump in the road.

The opposing personalities on this album is uncanny and their Brooklyn influences shine throughout. Matt & Kim are no doubt a pop duo, but their ability to play on Schifino's percussion allows them to create variety. The energy of this album is undeniable. With clashing sounds coming from both sides, they have the edge of a punk rocker but the vertebrae of a pop star.
- Kimberly Manning
Streaming source: http://soundcloud.com/mattandkim/cameras
TOUR DATES
View all X tour dates for .