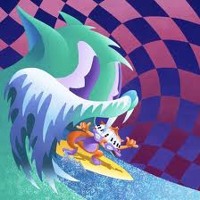 A few months back, I remember waiting for you to come on stage, filled with anticipation, curious about how the next couple hours would play out. You had announced a last minute show the day before headlining at Treasure Island Music Festival and I had scored cheap tickets. The night was young. The room got dark. People were talking in hushed whispers. You shuffled on stage.

For the next two hours, I waited to have fun. I kept thinking that something had to happen soon, that I'd start enjoying myself and dance. That moment never came. You mumbled into the mic about playing some "new tunes." I could barely make out coherent sounds. If this is what their new album is going to sound like, I thought, they're gonna lose a lot of fans.

Well, here we are. That feeling of dread that I felt the night of your San Francisco show crept over me when I started listening to your new album, Congratulations.

I so badly wanted to give you guys another chance. I wanted to stop thinking you two were pretentious assholes who refused to play your hit single at your live show. I wanted to convince myself that you boys weren't arrogant, immature musicians.

Finally, I stopped trying to talk myself into liking you.

Congratulations may as well be mindless noise. The album has zero cohesion and is completely uninteresting. It sounds like you tried to emulate "˜70s trip-pop, realized you couldn't, and yet still kept stumbling towards that unachievable goal.

Boys, I don't understand. You were doing okay for a while, right? Oracular Spectacular was a little rocky, but it had some solid hits. Even I have to admit that "Electric Feel" and "Kids" were fun. They excited the masses--you made hipster dance music that was accessible!--and for that, I give you some credit.

But....seriously? Congratulations is a disaster. Pitchfork says you are attempting to "Create Art" -- I suggest that you turn over your guitars and quit. The album was almost painful to listen to all the way through. Halfway through the god-awful, 12-minute song "Siberian Breaks" I actually had to pause it and take a break myself. When I finally made it to the last song, the title track, I was relieved. Okay, okay, an acoustic song, not too horrible... then I paid attention to the self-aggrandizing lyrics.

"I'd rather dissolve than have you ignore me"?

Well then. I'd rather that you dissolve.