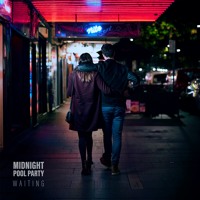 It’s been a while since Midnight Pool Party released original material, so I was excited to see a new single from the Sydney-based duo (Morilla and Oliver Dela Cruz) this week.

“Waiting” offers a refined mix of catchy electronic harmonies and lyrics over a bedrock of punchy beats, signalling a change in the duo’s sonic approach. There are still traces of the duo’s earlier disco-infused releases – most notably the slightly detuned piano, which is becoming a quirky sonic trademark of Midnight Pool Party. They’ve kept their original essence, but evolved it into a new product that’s less Daft Punk disco, and more Disclosure electronica.

Filled with colourful chord progressions and voicings, “Waiting” pops and jumps with a slightly retro feel. The duo keeps the electronic elements simple, but they masterfully tweak the beats and vocals with subtle effects such as echoes and reverb to stop the chorus from ever becoming overly repetitive. This is a credit to the duo, as well as the track’s co-writer Kamaliza (of Olympic Ayres) and co-producer Luke Million.

The overlapping and repeated refrains – “is it really worth waiting for you” and “waiting / waiting for” – ultimately highlight the track’s message, drawing listeners into a state of paralysis as though we, too, are waiting for someone.

I say it’s definitely worth waiting for Midnight Pool Party’s debut EP, Dalliance, which is set for release in February next year.