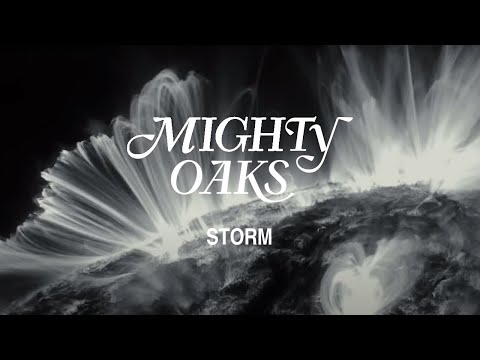 Just as the subject of their name would do in the midst of the subject of this song name, Mighty Oaks have weathered the storm of the indie-folk movement and emerged stronger. They could easily have become lost in the noise, but with consistently solid song-writing and an unpresuming approach to success and fame, the multi-national folk-rock trio have cultivated a strong following, not least represented by their recent sold out show in their adopted home city of Berlin.

"Storm" is a quintessential folk-rock number, but that doesn't make it any less class. Beautifully crafted with strummed acoustic guitars, gliding string lines with persistent kicks and snares providing gentle momentum, it builds steadily upon itself. Frontman Ian Hooper's voice is crisp, clear and unfurls the "Storm" metaphor with grace. It's a well worn one, but their sincerity carries it through.

"I'm lost in the woods and the darkness is coming, the storm is all around," is the hook that binds the track together. It all plays out more as a blustery autumn day, but don't let that deter you. Might Oaks are quality, consistent and "Storm" is well worth a listen.