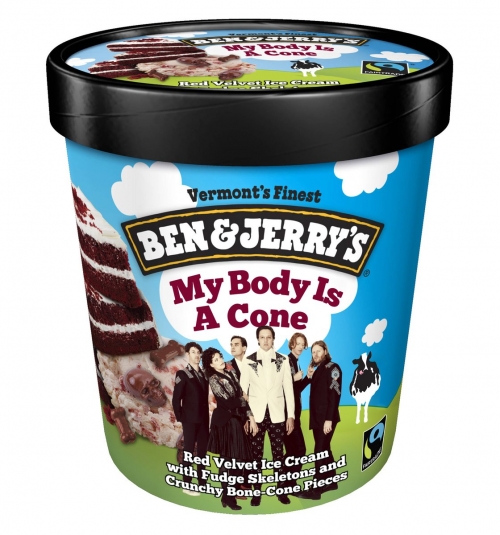 Arcade Fire's "My Body Is A Cone" Ice Cream?

Updated 7/27/2017: Turns out, Arcade Fire are the kings of trolling. We reached out to Ben & Jerry's and they explained the following: "We're sorry but this is not a Ben & Jerry Flavor and we have no further information."

Arcade Fire, the highly acclaimed indie rock band, are working with the ice cream giants, Ben & Jerry's. It's all listed below. To start though, we'll lead with a wonderfully whimsical clue: "My Body is a Cone." There is a lot going on, we'll also shed light on Arcade Fire's involvement in all things Brooklyn Vegan and Yondr.

Arcade Fire ran a poll on Twitter to find a name for their Ben & Jerry's ice cream's flavor (all of this was in honor of National Ice Cream day...of course).

That's right, a big pun on their single "My Body is a Cage," which you can listen to below...and eat a themed ice cream to.

Keep in mind, that these days everything is a meme and everyone is a troll, so it's highly unlikely we'll ever get to taste the flavor that involves 'fudge skeletons' and 'crunchy-bone pieces.' Then again, who knows, they did make cereal for "Creature Comforts," a track off their forthcoming album, Everything Now.

Arcade Fire have an Everything Now release show taking place on July 27th at Grand Prospect Hall in Brooklyn. It'll be live-streamed on Apple Music. There was controversy after Brooklyn Vegan revealed a message detailing a dress code for attendants:

Our dress code is HIP & TRENDY as if you are going to a concert or night out with friends! The event is standing-room-only so please plan accordingly.
PLEASE DO NOT WEAR shorts, large logos, flip flops, tank tops, crop tops, baseball hats, solid white or red clothing. We reserve the right to deny entry to anyone dressed inappropriately.

Arcade Fire has disputed this, saying that if the 'dress code is "hip and trendy," band members will not be allowed through the door.' Win Butler, the band's frontman, said that the dress code, as well as phones being taken at the door (explained below) must 'be an Apple thing.'

Included in the pre-show message, was the following notification:

No cellphones, cameras or recording devices will be allowed at this show. Upon arrival, all phones and smart watches will be secured in Yondr pouches that will be unlocked at the end of the show. Guests maintain possession of their phones throughout the night, and if needed, may access their phones at designated Yondr unlocking stations in the lobby.

Yondr is a new development that allows show participants to keep possession of their phone, but removes their ability to use it. As people enter a venue utilizing Yondr, they place their phone in a bag which locks when entering certain zones.

Arcade Fire have hosted a secret show before where phones were taken away at the door, however, they're denying plans to do this at the Everything Now release show. To end off, let's all take a moment to allow Win's wise words to sink in:

Arcade Fire - My Body is a Cage