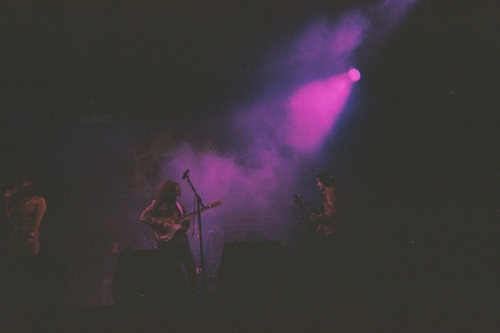 The setting was perfect, South Africa's endless coast was on full display last weekend, highlighted by a dazzling Saturday sunset. Fierce winds were matched by festival goers' eagerness to hear the music that had drawn them coastside in the first place. If you were looking for psych rock, this was your party, and it was evident that the crowd who assembled on Endless Daze's beachy plateau were all about the music. That, and having a good time (eg. one festival goer woke up in the communal toilets mummified in toilet paper with his shoes tied to the lawn chair he had deemed bed-worthy. I believe it is an now Endless Daze legend). But there were other heroics in store, as the artists themselves poured their hearts and souls into this tiny festival. Even when things got a bit chilly on the Saturday night, three angelic young men took to the stage, keeping the vibe going until the flood lights were eventually turned off. It's hard to express in words how great some of the acts were, partly due to excessive drinking; however it is definitely worth mentioning the likes of BCUC, who were phenomenal, Sol Gems, who managed being heckled quite professionally, and Felix Laband, whose eclectic style added a bit of excitement to the stage. I'm still recovering from the jol (for those not from South Africa it means "party"), and I probably will be all the way up until next year!