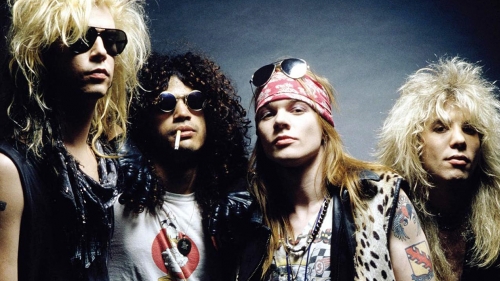 Guns N' Roses have kept fans guessing for the past few days, with cryptic website updates and mysterious ads during film screenings. A new album? A tour? What could it possibly be?

Well folks, the news is in: the hair metal band are set to reunite with founding members Axl Rose, Slash and Duff McKagan to headline Coachella 2016, with a potential stadium tour in the works too. Drummer Matt Sorum (GNR's second drummer after Steve Adler) is apparently going to be behind the kit.

On top of the huge Coachella announcement, Billboard reveal that negotiations are underway to book a 25-date North America stadium tour, including one of the first ever shows to be played at the Las Vegas Arena after it opens on April 6.

As fellow hair-metal-rocker Steve Tyler once said, "You'd be surprised how expensive it costs to look this cheap," so prepare yourselves for the hefty costs: with the band reportedly asking for up to $3 million per show, concert tickets will set you back around $250-275. Eeek.

Axl and Slash haven't performed together since way back in 1993. While GNR have since performed in a number of incarnations, the only original member on their most recent tour was Axl Rose. Meanwhile, Slash has maintained a strong solo career, as well as success in rock supergroup Velvet Revolver.

Reunions and nostalgia are all the rage right now, sure, and everyone from Pulp to AC/DC to Tupac's hologram have graced the Coachella main stage. But surely some things are better left in the past.