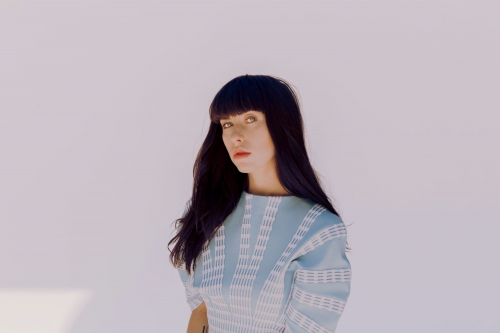 Kimbra is currently touring the US with Odesza and Son Lux for her third studio album, Primal Heart, which dropped April 20th. She’s come a long way since her first album,Vows, and having received wide-spread recognition from her collaboration with Gotye on “Somebody That I Used to Know” in 2011. Ahead of the album, her newest singles, including “Top of the World” and “Everybody Knows,” dropped with music videos in early this year. I recently caught up with Kimbra about Primal Heart, current tour, and what’s next.

It turns out she’s working on a bunch of collaborative releases around the new record that’ll be out within the next few months. This string of releases will reimagine the songs, featuring unplugged, acoustic and instrumental elements, as well as remixes by other artists. "I just can't wait to bring people into that world!” Kimbra says. She’s also been working with Childish Gambino, although it's yet to be released, but when he has more time apart from his music and TV work they’ll be getting together in the studio -- so stay tuned!

Indie Shuffle: What are you most excited about on this tour?

Kimbra: I think I'm probably most excited about those shows with Son Lux just because I think we're going to draw a really diverse and interesting audience. I think people who appreciate their music also find my music really interesting, and that'll be a crowd that will be quite easy to perform to, because they're probably really well acquainted with the music. But you know these shows with Odesza are different because we're playing to audiences that perhaps we've never played to before, and maybe some of them don't know the music and it's this totally different thing. But I really enjoy the challenge of that as well, of presenting the music to people for the first time and sort of almost like evangelizing, it's a whole different thing.

How are you incorporating production elements in the songs on tour?

I think the songs translate really well in this new setup, which is pared back—but in a way it sounds bigger than ever because we're working with so many huge sounding electronics and I'm doing a lot of beat-work on stage, and we're all triggering electronic aspects and working on synths and it's got a really full sound, and it works really well for translating this album. I made the band a little smaller in order to create greater impact with things like visuals, lights, and design on stage. The album cover kind of features some amazing laser work by Night Mind, a design team out of Brooklyn, and they helped me kind of come together with the concept of the album cover and the promo photos. So we wanted to take that a step further and take some of those LED lights on the road, and recreate that idea of emergence. So yeah, it's been a lot of fun to get a little deeper into that realm and work with a team to create a bit more of a immersive performance.

What goes into clothing choices and your look on stage?

For me that's a really big part of how I stay excited on the road, is coming up with new looks every night. I love just supporting up and coming designers, or designers that I really believe in, and so I'll take a selection of pieces out on the road, and just listen to my body each night and think, “how am I feeling tonight? what do I want to give the crowd? how do I make this unique for this city?”

What’s your favorite part of touring, apart from performing?

I think just stumbling into the unexpected, you know? Just picking a direction to walk in with someone in the band, to just see what we stumble upon, and it might be like, a used bookstore. And suddenly you spend an hour in this tiny little bookstore in the middle of America, stumbling across such strange titles. You never know who you're going to meet, and some of my favorite moments are just when you take that chance to engage the culture and that city and find yourself meeting some eccentric, amazing person, or finding a store you'd never find in New York or somewhere else.

How did you end up creating “Top of the World”?

It came about when I was actually doing a lot of writing that I thought would go for other people. I was really interested in opening my approach, just trying some other things. And if they didn't end up going on my record, that was kind of liberating, just freeing. When Skrillex played it for me at the studio, I start singing along to it. For a long time that beat was floating around and we were shopping it to people. But I had a lot of confidence building from Childish Gambino, he was a very big influence, he really advocates for me to step into some new styles. And when we were jamming together, I would try to kind of do this spoken word thing along with him. And he'd be like, “yo, that's sick, go with that.”

A lot of people seem to still only know you from your vocal collaboration with Gotye. How would you like to be known these days?

I think probably people don't know that I'm a producer of records of well, that's something I've been pretty involved with from the start. And that's not something I had to do with on the Gotye song, I was a vocalist on that song, and became a pretty big part of the storytelling of that track. So grateful for the opportunity! But even before that point, you know, I've been co-producing alongside people on my own records, I write beats on my albums, I'm performing them in a very immersive way with all the elements being filtered through my vision. I think that's quite different than just sort of being a singer. Which I'm happy to call myself that but I look forward to having a space to speak to people on that level of like, the vision behind the vocals.

You recently wrote a letter to her younger self as part of a series by Red Bull, which ends with the line: “big dreams happen from small conversations.” Does that still hold true for you and your career today?

There are some things that have changed significantly and then there's some things that haven't changed at all. I still think of that line, "big dreams happen from small conversations," and I still think that's true… you never know what you'll get yourself into and learn an amazing little parable from, that then goes on to become a really important song. You just never know! Those small conversations with a friend where you go, “wouldn't it be cool if we did this?” And then all of sudden, who knows! You're down the line, you're doing it. And even though I have more recognition and more resource to do things, it still works the same way.

I deal with a lot of self-doubt, and I opened up about that in the written poem -- but I think what changes is you have more experience under your belt of seeing yourself overcome dark times, you've seen yourself succeed in endeavors, right? You've seem yourself have small conversations and live them out to become dreams, so it gives you a different sense of inner trajectory. And purpose, to see through those ideas. And you have a team around you, that hopefully you've curated to be really supportive people... But there's a lot of things that just remain just the same humble person, you know? 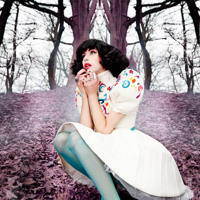 Kimbra Come Into My Head