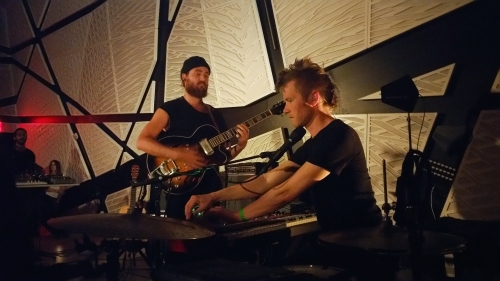 Arriving at National Sawdust in Brooklyn was like walking into an interactive art installation. High ceilings, sharp geometric patterns with feathered textures, and scattered, strategically placed lights all contributed to the surreal feeling of the venue. The stage was centered against the back wall, barely raised, mitigating the boundary between the audience and the musicians.

The performance was described as "In Situ," a latin term that -- when applied to art -- refers to a work that is specifically created for, or takes into account the location in which it takes place. This was particularly poignant considering RY X uses live samplers and aims to create consistently different sets each night. Every element of the space was designed to emphasize the artist's music and facilitate connection with the audience.

The show was sold out, though there was ample space for the small gathering. As the lights dimmed, onlookers broke from their circles of conversation and fell silent, directing their full attention to the stage.

RY X is the brainchild of Australian artist Ry Cuming, whose résumé also includes cinematic project The Acid. Cuming was joined onstage by two other musicians armed with synthesizers, sample machines, and a percussion kit. Donning a flowing black garb that seemed to swallow his corporeal form, the frontman floated to the stage with a cool grace, picked up an electric guitar and invited us into his world.

Eyes closed, he struck a few scant, reverberant guitar notes and approached the mic, bathing the room with his dulcet voice. With his desolate, minimal approach, I was interested to see how his music would translate to a live setting. Each song was stripped down, communicating unabashed vulnerability and raw emotion. They all followed a similar structure, starting low and soft, progressing slowly into a subliminal swelling of bass notes then retreating abruptly. The acoustics of the setting sent the quavering tones reflecting off each surface, immersing you in sound and creating an atmosphere of collective introspection.

As I looked around, not a single person was swaying. It was as if the audience had been rendered immobile, captivated; as if the slightest breath would shatter the rare fragility of what we were experiencing. It wasn't until the trio dove into the bouncy, hollow beat of "Deliverance" that attendees felt comfortable to move.

Given the mild nature of his voice, I was surprised to see that Cuming has an understated yet playful personality. Between songs he'd banter with the audience members, making quips like "It's rare to see a room full of New Yorkers this quiet." He seemed at home on stage, baring his soul to a room full of strangers. He frequently expressed his gratitude in a way that felt genuine; I couldn't help but feel like I'd like to grab a beer and talk about existentialism with him.

I was extremely impressed with the trio's ability to work seamlessly as a single sonic organism. They flowed through tracks like "Sweat," "Berlin" and the heartbreakingly beautiful "Only" with almost machinistic precision, embracing the art of nuance with subtle synth washes and striking gusts of crash cymbals. At one point, the drum player was engaging in percussive aerobics with one hand on the keyboard, one foot on the bass drum and two mallets wedged between the fingers of his other hand, all while contributing vocal melodies. Talk about multi-tasking.

RY X is an artist that is meant to be seen live in a small, intimate setting. I was lucky enough to be present for this serendipitous circumstantial alignment. In preparation for the May 6 release of the album Dawn, the three-piece will be diving into a European tour. You can find tour dates here and pre-order the album here (UK and Europe only). 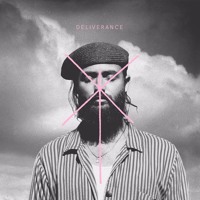