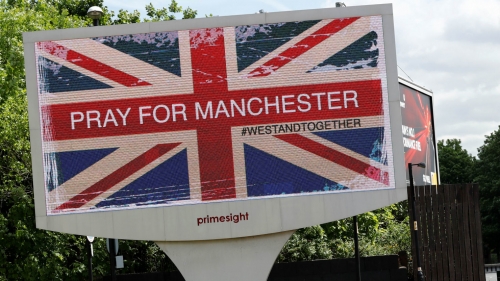 Making Sense of the Senseless: Hopefulness In the Manchester Arena Disaster

A suicide-bomb was detonated in the foyer of the Manchester Arena during an Ariana Grande concert claiming 22 lives and seriously injuring scores more, many of whom are children.  The Manchester police, in an official statement said: "This has been the most horrific incident we have had to face in Greater Manchester."

Reverberations from the bombing are still being felt the world around.

broken.
from the bottom of my heart, i am so so sorry. i don't have words.

Many celebrities and pop culture icons have taken to Twitter in support of Grande, the victims, and global communities of music fans.  One of the overwhelming sentiments being shared is that live music is such an integral part of so many peoples' human experience and that it should be kept sacred and safe.

However, immediately following the bombing, and still now, social media outlets are rejoining the lost, comforting the frightened, and giving hope.  A quick search of "#ManchesterBombing" reveals an outpouring of empathy, illuminating not only the best of the people in Manchester, but of the world.

The internet, in all its miserable vitriol, is home to tone-deaf 'humor,' rapidly escalating and bigoted rhetoric, and cruelty.  But each second as the dust continues to settle it is the voices of compassion, care, and resolve, that begin to unite and answer the many questions arising.

How do we make sense of these kinds of incidents, especially as music fans? Following the news out of Manchester was as chilling as the infamous Eagles of Death Metal show in Paris in 2015, or the 2016 Orlando nightclub shooting.  To many, music is sacred, and the live music experience is paramount to how people form their own identities.  How can one eagerly line up to see a show, or dance at a club in the face of these nefarious possibilities?

Let us look at some wisdom from an old man, meant for small children, in the hopes that we can begin to heal.  Contained and retweeted within the #ManchesterBombing feed is an anecdote about television personality Mister Rogers, who said: "When I was a boy and I would see scary things in the news, my mother would say to me, 'Look for the helpers.  You will always find people who are helping.'"

In the community of Ariana Grande fans, music listeners, concert goers: I urge you to continue seeing the helpers in Manchester, I urge you to find the helpers at your local clubs, your concert venues.  The music can not, must not, ever stop.