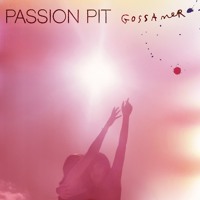 It's difficult to contain our love for Passion Pit; Indie Shuffle is overflowing with the synth-pop sounds from the Boston-based band. Since their romantic Valentine's Day mix tape start, the quintet has released two albums and a slew of saucy remixes. And we love them all.

Passion Pit has toured the world, performed on Saturday Night Live, and recently headlined Madison Square Garden (during an epic snowstorm, no less). Oh, they are also Taco Bell approved.

We had the pleasure of speaking with bassist Jeff Apruzzese about the band's quick ascent into mainstream, plans for a third album, and DJ'ing online with the Chain Gang of 1974. Check it out below:

Over the next few weeks you will be playing Lollapalooza Brazil, Sweetlife Festival, and Coachella. What do you enjoy most about playing these gigantic festivals?

It's kind of like band camp...You are in these foreign territories, so you're all backstage everyday. It's natural for you to migrate and start hanging out. It's always fun to meet new friends and see bands that you kind of look up to, and being like, "˜Oh, they're not so crazy. They're just like us.' And also catching up with old friends that you haven't seen in awhile because you're both on tour all the time. It's really hard to catch up with people when you're never home.

I'm really looking forward to seeing a lot of bands too. Queens of the Stone Age is playing Lollapalooza [Brazil]. You get to see bands that you wouldn't necessarily buy a ticket [to see]. Like when we played Outside Lands, Metallica played. I've never been the biggest Metallica fan in the world and I'd probably never pay to see them, but [it] was like, "˜I might as well walk over and see what this gigantic metal band is all about.'

How was their set?

It was worth the walk. They are old, but they still put on a really good show. They gave me an appreciation for a lost art, which is mainstream touring rock and roll production. You don't really go to serious shows anymore where there is pyrotechnics shooting out from the bottom of the stage.

When you first signed on with Passion Pit in 2008, you had just graduated from college. Were you able to fathom the success you're currently experiencing?

I feel like a lot of bands say this, but I know that we can say it truthfully and humbly, that we weren't really expecting any of this. We weren't really trying for any of this to happen. I think we are just trying to see how far we can actually get before someone tells us this is a joke, and that the dream scenario that we've been living in is over. Everyday is a blessing.

We feel so lucky to be able to do everything that we are doing. It's been so fast paced for the last four or five years, from when this whole project started, sometimes we need to take a step back and see how much we've actually accomplished.

That leads perfectly into my next question. You have now performed on Saturday Night Live and in Madison Square Garden. When did you experience that "˜I've made it' feeling?

[It was] when we were playing Madison Square Garden.

Everyone in the band can attest to this. When we first started playing, we'd be in our crappy little practice space in Brighton, and [I'd say], "˜If this band ever plays Madison Square Garden, that's it. I'm done. I'm quitting because there is no where else to go from there.' I grew up in New Jersey, so [MSG] was the big venue. Any big, rock and roll arena band that played there had a sense of accomplishment. That show was definitely a huge milestone for us, and for me it was a feeling like I'd actually made it.

Completely honest, I don't think that we even realize the impact that this band is having. I mean that in a very sincere way. Aside from playing SNL and Madison Square Garden I don't think that we fully understand what this band is doing right now. I think we have our blinders on. We are just trying to keep going. I think we are always looking forward to the next thing and seeing what could happen.

Do you have another dream venue you hope to play? Where have you set your sights now?

In terms of iconic venues, I think we've hit the mark in New York and maybe the country.

I think the thing we are thinking about the most right now is maintaining this thing that we're riding, and trying to record a new record and get the new material out there as soon as possible. I feel like we were very lucky with the amount of time that we took off between Manners (2008) and Gossamer (2012).

It was our second full-length record and we evaded the sophomore slump. This record is exceeding all of our expectations. I don't think any of us thought we'd be in a band where our songs are being played on the radio and television. For this record to be getting all of this [attention] is kind of crazy.

There was no sophomore slump for you. Gossamer has been well received by fans. What are you most proud of on that album?

When I first started hearing the tracks I was really excited about everything that Michael [Angelokos] was doing. I was really into the new direction and the way the material was sounding. But I was also anxious to hear how other people would receive it because I felt that it was kind of a black and white comparison to Manners. Manners reminds me of going out on a Friday or Saturday night in New York City and going to clubs. It was just so dance, synthesizers and club heavy.

When I hear Gossamer, I hear more of a well thought out album [with a] mature songwriter. There's an actual pop continuity with the record, a general theme going on.

You mentioned keeping the momentum going. Are you already working on your third album?

It's definitely something that we've been talking about. When we were touring on Manners, we were so new and so fresh to it all, that we were getting the crapped kicked out of us by touring. We weren't really thinking about anything else besides getting through the album campaign. We were so exhausted and we were playing so many shows. We were gone six, seven, eight weeks at a time, so that was stacking up against us.

Now we've been able to go out for three or four weeks at a time and then go home to regroup. The [third album] is something we keep talking about every time we are together. We are trying to keep this relationship growing, that we have together as a unit. Keep it maturing. Getting closer, tighter.

It takes a long time for people to be able to communicate with each other musically without actually speaking, and understanding what one another is trying to do. I don't think we are there, yet. I think it's something that takes a long time to achieve, but I definitely think we are getting a lot closer to where we want to be as a band.

We are trying to have open communication about this record and start working on it while in between tours, instead of completely coming off the road and trying to start recording. It's a jarring thing to do, creatively and emotionally, to be out on the road every day, playing five or six shows a week, and feeling like you're really on it. Then going home and hitting this weird, depressed state where there's not really any creativity going on, because we are all separated in our own apartments.

I think we want to be able to take the momentum we have on tour with one another and take that into a spot where we can start developing new sound.

What must you have with you while on tour?

My new safety pouch has been my coffee supply kit, which is an AerobieAeroPress, a Hario mini-mill coffee grinder, a little pocket scale to weigh out my grinds, a travel kettle that is .5 liters, and a mason jar to collect coffee beans. That's kind of been our thing.

We are definitely not young to this anymore. We have all the partying and crappy shows out of our system. We drink a lot of coffee. We always ask for locally roasted coffee beans, to kind of collect samples around the country. By the end of a tour we'll have 20 different containers of coffee that we've gotten from all over the place.

How do you take your coffee?

Black, the only way I can enjoy it!

I noticed on Twitter that you were recently on Turntable.fm with the Chain Gang of 1974. They are another phenomenal band. How was that?

That was funny. Kam [Mohager] is a good friend of mine. I actually played bass for him on a tour, maybe a year ago or so. Passion Pit was off tour and I was getting a little itch for touring, so I filled in for them for a few weeks while they were opening for The Naked and Famous.

The Naked and Famous, Chain Gang and you? That's a powerhouse mix!

It definitely made me feel like I was little bit of a bitch. [Laughs.] I enjoyed it! But I was back in a van, loading in gear. I was like, "Oh man, I haven't done this in awhile.'

[Turntable.fm] was fun. Kam and I were chatting on Facebook and he was in there. I was trying to start a thing because Nate [Donmoyer] and I did a Turntable.fm promotion a few months ago. They made us custom avatars in these sweet tuxedos. Up until now they had a capacity limit and with the promotion we were doing the limit was off, as many people as you want could go in the room. So that's what Nate and I did, and I think there was close to 2,000 people in the room.

I was trying to do that [with Kam]...but I didn't have patience. I think it only lasted like 15 minutes and then I started cooking dinner.

Final question. When are you happiest?

I am the most happy when I first come into my apartment coming off tour, and I walk in and I see my dog [Betsey]. Usually when I get home, my girlfriend is at work. That's my second happiest when she gets off work. But my dog? I don't think I'll ever meet another girl or woman, in my life, that gets so excited every time I leave and come back. She is so happy whenever I come home.