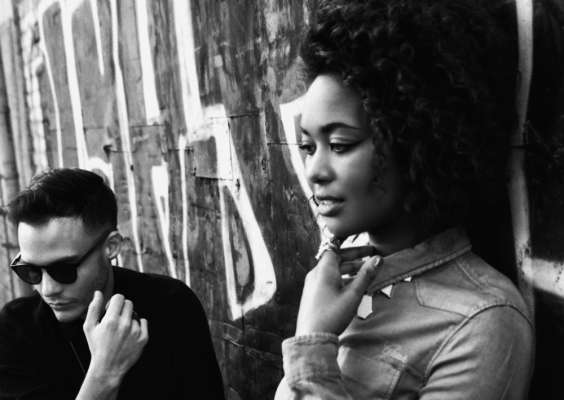 Indie Shuffle is proud to announce the global premiere of the self-titled debut album by SOS. Stream the entire album below, and read on for a review of the musical work.

There's something to be said about the production of R&B in today's world of music. The elimination of the complex. Solidarity with a stripped-down beat and falsetto vocals. Or perhaps not falsetto, but distinct and precise. It's the kind of music that one could hypothetically dance to, but it's also the kind that one could also share an intimate moment with -- whether alone with the music, just you and the art, or with another human.

As is the case with many of the talented R&B artists of today, SOS has managed to create (or perhaps fall into) a slightly newer and improved genre of R&B. It's the sound of 2014. What sets apart SOS from the others is what they tap into -- the lyrics that tell some sort of story about the body and mind, an ode to the generation of today, combined with trap and dance beats. These elements are heard in the music of artists like The Weeknd, FKA Twigs, and Kelela. The newness and innovation of electronic production, combined with the constant challenge for artists to innovate their music with produced sound, is what brings us here today.

The self-titled LP features a slew of experiences for the mind. Arguably, each of the tracks on the album could stand for elements of a momentous and exciting relationship. Songs like "Youth in Decline" start with a gray and faraway sound that feels like a morning of reflection. The chorus kicks in and the reality is suddenly clear, despite the subject matter.

I think I'm better, better, off

When I'm drunk or high

It's actually so simple, but still warrants thought. The song forces us to think about the state of ourselves. The running away from reality, constantly searching for that outlet into another dimension. For some, it's a cycle that remains true and true, weekend after weekend. The weekdays are the race to the end. And the Monday that follows leads that much closer to the eventual pitfalls of our youth. Think of it not as a singular isolated moment of decline, but rather a spiral that continues on and on.

The album possesses a genuine quality, reminiscent of a baby's preliminary experience and interaction with everyday objects and moments on this planet. It's seeing and manufacturing a perfectly synchronized chaos, not in production, but in message. The ears are re-introduced to a duality that has only recently begun to exist -- honest emotions and layered beats.

SOS wants us to understand what it is that we want, to get honest with ourselves. And I'm happy to oblige.