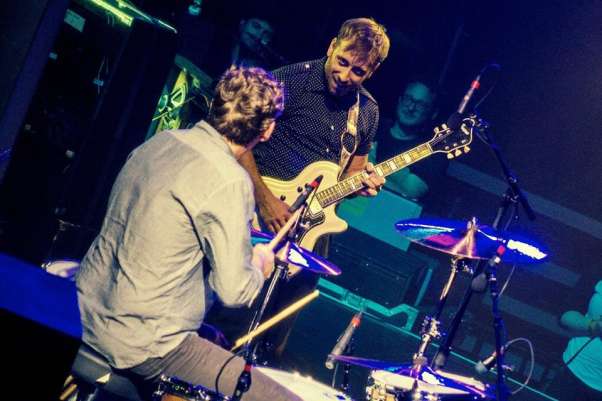 The Black Keys and Cage the Elephant invaded Chicago for a 2-night stand on the "Turn Blue" world tour at the United Center last weekend. For the duo from Nashville (by way of Akron), the shows solidified the Keys' status as arena headliners. For Cage, it represented another step towards the same, collecting on the success of their third album, last year’s Melophobia.

The raised stakes for Cage made for a perfect setting for their raucous live show. With a limited set time as openers frontman Matt Shultz went from wearing a regal cheetah print cape to shirtless in the crowd in virtually no time, cranking out a best of set that included “In One Ear,” “Ain’t No Rest for the Wicked,” “Shake Me Down,” and “Come a Little Closer."

Their opening set benefited The Black Keys, as the capacity crowd was buzzing and ready for a shout-a-long. Patrick Carney and Dan Auerbach were happy to oblige. With a heavy focus on their Danger Mouse-produced albums, Attack & Release ("Strange Times"), Brothers ("Next Girl," "Tighten Up," "Howlin’ For You") and El Camino ("Lonely Boy," "Gold On The Ceiling," "Money Maker"), the live experience enhanced their newest, the moody Turn Blue, and they even squeezed in a new cover of Edwyn Collin’s “A Girl Like You.” Closing the night with “Weight of Love,” “Turn Blue,” and “Little Black Submarines,” the subdued finish signaled the continued maturation of this once gritty garage rock act into America’s defining rock band.