sweeney kovar
Published:
Sep 20, 2013
Total plays:
11,672
Saved:
59 times
Sounds like: House Shoes, Blu, Jon Wayne, Danny Brown
Tags: hip-hop, rap, underground hip-hop
Why do we like this?
Since Blue Mondays, Quelle Chris has fastidiously built a his own lane. With every additional project, from Shotgun and Sleek Rifle to 2Dirt4TV and its successor, Quelle has been uncompromising in his quest to deliver unadulterated rap music that is both dead serious and borderline immature.

A skilled rapper and beatmaker, Quelle lacks the kind of self-awareness that relegates artists to an easily recognizable style. He can be heartfelt and intimate, irreverent or the rappingest of rappers. He's taken the long route to commanding the respect of respected and innovative artists like Roc Marciano, Danny Brown, Alchemist, and more.

Finally, after toiling for years through his own resources and connections, it seems Quelle is beginning to have the platform he deserves. After signing with the indie powerhouse Mello Music Group, Quelle's mixtape 2Dirt4TV #2: Niggas Is Men caught fire on the Internet and became the album-before-the-album. Now the album is almost here.

The Ghost At The Finish Line hopes to congeal all of his previous demonstrations into a breakout project. Though there is a respectable list of collaborators, Alchemist, House Shoes, Knxwledge, Black Milk, and Oh No, it is unmistakably Quelle's party.

Just check out the first leak, "Super Fuck." What artist besides Danny Brown can be so crass and so endearing at the same time? While others would overstate the point and turn gauche, Quelle has fun with the idea and lets the beat lead the way. The ending interlude showcases his humor as Quelle recreates Mary J. Blige's "Real Love" and turns it into an ode to marijuana.
- Google sweeney kovar
Streaming source: http://soundcloud.com/mellomusicgroup/super-fuck-prod-quelle-chris
TOUR DATES
View all X tour dates for . 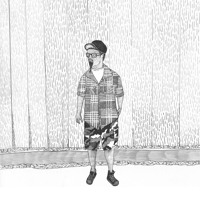