Joshua Mellin
Published:
Mar 26, 2012
Total plays:
10,181
Saved:
22 times
Sounds like: Bon Iver, Tallest Man On Earth, Edward Sharpe & The Magnetic Zeros
Tags: bon iver, fleet foxes, edward sharpe
Why do we like this?
Are Fleet Foxes breaking up? First J. Tillman posted on his Tumblr "Farewell Fleet Fans and Friends.  Back into the gaping maw of obscurity I go.  Tokyo is my last show with the Foxes.  Sorry if I was distant and obtuse if we ever met.  Have fun."

Tillman began his career as a solo artist and has released three other albums before joining the Foxes in 2008, so maybe it's not a complete surprise he would return to his own projects, but it still leaves a gaping hole in the band's lineup.

Also, members Christian Wargo and Casey Wescott joined Poor Moon, a band which has been gaining popularity since being signed by Sub Pop, playing last week's SXSW and is currently on tour supporting Lost in The Trees. Which leaves guitarist Skye Skjelset and frontman Robin Pecknold as the odd men out.

Pecknold has been going through some tumultuous times of his own as of late, breaking up with his girlfriend and penning a song about it "Olivia, In A Separate Bed." Also, he ominously tweeted "Don't start a band. Just find someone you love and show up for them. That wasn't an endorsement of music duos. Like, love love."

So while that may not be a specific to the Foxes all these factors may not bode well for a band that functions so tightly on unison.

Pecknold's new tunes are that of a wanderer, longing, searching for something. Whereas Poor Moon's is a little freer, faster and reminiscent of earlier Fleet Foxes tunes, though not as intricate. After Pecknold's compulsive creative process during the band's second album, last year's Helplessness Blues, perhaps everyone had simply had enough.

Afterwards Pecknold told Spin Magazine: "Making music can be this really self-involved, toxic process. I've ended up letting it define me and take over my life in a lot of ways." Whether this is all just a phase that could see the band reconstitute for a third LP, or retool its lineup, is unknown at this point, but what is clear is that there is major upheaval in one of the best band in indie's camp.
- Google Joshua Mellin
Streaming source: http://soundcloud.com/mindfulearful/robin-pecknold-derwentwater
TOUR DATES
View all X tour dates for . 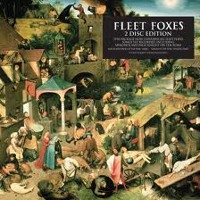