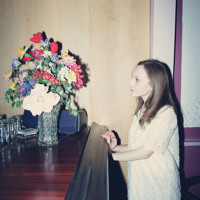 Rosie June Sound It Out

While British Columbia has some pretty good indie rock bands, it's seriously lagging behind in the synth pop world.

Enter Rosie June, a synth pop singer/songwriter who's new on the scene and making waves with her 2013 record Listening Post, which was just recently reissued on Draper Street Records, that of Broken Social Scene's Brendan Canning.

"Sound it Out" is a casual and catchy offering that'll have you hitting the replay button. Rosie doesn't sound out of place amongst the likes of CHVRCHES and CocoRosie; nothing groundbreaking, but a nice add to your summer playlist.