Jason Grishkoff
Published:
Feb 25, 2010
Total plays:
15,524
Saved:
35 times
Sounds like: Ben Harper, Devendra Banhart, Patrick Watson, Jack Johnson
Tags: folk, folk-rock, singer-songwriter
Why do we like this?
There's something undeniably raw and emotional in the voice of Sean Hayes. There's also something unquestionably amazing about the instruments that back-up Sean Hayes. Together, their sound is something to write home about, and it's not just because this isn't what I usually listen to. It ranges from the melancholic sounds of Damien Rice to the percussive multi-layered background household noises used by Patrick Watson. His new album, Run Wolves Run, showcases both the traditional, slower-paced melodic ambivalence of his prior records, and a newer, more actively band-like repertoire. The two songs attached to this post highlight the contrast (one, in form of Youtube below).

Particularly striking, and meant in no way as disrespecting, I was surprised to find that he is not a fresh-faced 21-year-old on the scene. On the flip side, he may have already had more than 21-years of experience! I can't entirely be blamed, as the first picture I saw was the one attached to this post, as well. Undoubtedly, that is from an earlier time. This, however, piques my interest even more during the listening experience. I think the song, Garden (below), may help demonstrate why.


When you get to When We Fall In "“ you are treated to something a touch different "“ more "band" you could say. You still get Hayes classic slightly scratchy/nasal delivery (this is meant in the most flattering way, I have to say) but you know he is working with a crew on this one. If for nothing else than the echoing backing vocals you know that he is looking to show a bit of growth that was hinted to in previous albums. I find this song makes him part performer and part singer-songwriter. He is not just a guy with a guitar and lone spotlight on the stage, he is growing into entertaining and stretching his talents as a musician. I am excited to see what the remainder of the album has to provide - Slowcoustic

Nathaniel Rateliff - You Should've Seen The Other Guy 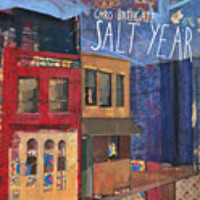