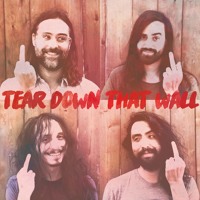 The Bright Light Social Hour Tear Down That Wall

Let me start off by apologizing to you readers. I’ve gone years without reviewing Austin’s own The Bright Light Social Hour because I just assumed that we were chock-full of their songs. I was mistaken, as are most people who assume things. Let me share some love.

Maybe you’ve heard of them before. In 2011, TBLSH notably swept the 29th Annual Austin Music Awards. They left with six awards, including “Band of the Year,” “Album of the Year,” and “Song of the Year” for their hit “Detroit.” The talented act has previously graced stages at Lollapalooza, Austin City Limits Music Festival, Hangout Festival, Sasquatch!, Wakarusa, and SunFest Music and Arts Festival (where I had the pleasure of covering them). And this weekend, they made yet another SXSW appearance at KGSR’s morning show.

“Tear Down That Wall” was produced by Spoon’s Jim Eno, and released on January 20-- Drumpf’s Inauguration Day. When people try to console us Americans, saying the political climate will breed great music, they are speaking the truth. TBLSH’s “Tear Down That Wall” is a refreshing, necessary anthem for our city, our country. The Austin-American Statesman described it as “a searing ode to unity.”

I love this band, I dote on them. I think in addition to being masterful musicians, they deserve heavy praise for their socially-conscious lyrics and messages. If this is your first introduction to the band, I’m thrilled. Sorry it took me so long to share.