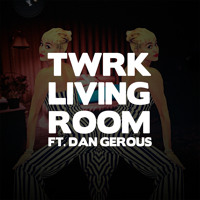 Lori Kay
Published:
Apr 13, 2013
Total plays:
27,931
Saved:
409 times
Sounds like: TNGHT, Lunice, Diplo, Flosstradamus
Tags: Electronic, dance, trap
Why do we like this?
TWRK is remaining aloof -- even after their third impressive release, "Living Room," went up on their SoundCloud. With massive releases slated for both OWSLA and Mista Jam's BBC Radio show in the upcoming months, the boys of TWRK are keeping their identity on the DL for now. They might be sitting next to you in a cafe right now.

I was able to get a few words out of the tight-lipped duo; I may or may not have been sworn to secrecy, blindfolded, given hallucinogenics and driven around for a few hours before they spoke to me through a friend of theirs that will only be referred to by his initials, J.J.

"We met in grade school in Oslo (Norway) and met up with Dan Gerous over the Internet in a MIRC chat room," they said.

"Our plan is to take twerk/bounce shit to the masses, and make every girl in the world pregnant by mid-July."

"Living Room" has been out for a a short time now and I do feel a little bit different (I'll let you know in a few months if their plan worked). With cover art of a pixie-cut Miley Cyrus twerking, and a teasing intro of Eve's "Let Me Blow Your Mind," they've got the powerful seduction techniques in play for the entirety of the track. We want more!
- Google Lori Kay
Streaming source: http://soundcloud.com/twrkmusic/living-room
TOUR DATES
View all X tour dates for .